Laryngitis is a condition characterized by hoarseness, a weak or raspy voice, and – in some cases – a total voice loss. It’s the result of an inflammation of the larynx that can be caused by infections, vocal strain, or allergies. 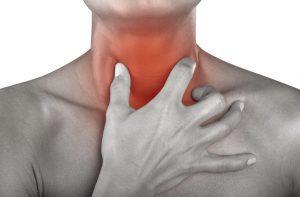 When Allergies Cause Laryngitis

When airborne allergens are inhaled, the immune system views them as a threat and triggers the blood cells to release histamines, causing an inflammatory response marked by increased mucus production. Mucus absorbs moisture, causing the vocal folds in the larynx to dry out. This leads to increased friction during speech, which causes irritation and swelling. The result? Cold-like symptoms that include hoarseness, a dry and scratchy throat, coughing, sneezing, excess mucus and phlegm, and a weak or raspy voice that might disappear altogether.

Treating laryngitis early is important; if symptoms persist, serious complications may occur. See your doctor if symptoms have lingered longer than two weeks. You’ll be given allergy testing in an attempt to identify the substance responsible for triggering your symptoms.

The key to treating allergic laryngitis involves reducing the inflammation in your larynx. Hydration is essential in lubricating the vocal folds and thinning excess mucus, so be sure to drink lots of fluids. Using a humidifier to moisturize the air will also help with hydration. Medications such as antihistamines can reduce the severity of your symptoms, and gargling with warm salt water can relieve discomfort. Avoid irritants that trigger an allergic reaction, such as tobacco smoke, and stay inside on dry, windy days during pollen season.

Most importantly of all, rest your voice. If you attempt to speak when suffering from laryngitis, you are liable to cause irreparable damage to your vocal cords.