Otitis media is the clinical term for an ear infection. This inflammation of the middle ear occurs when fluid builds up behind the eardrum, usually as the result of a viral or bacterial infection. Otitis media can affect anybody, but is much more common in children than it is in adults. 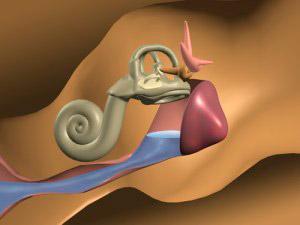 Viruses and bacteria are the main causes of otitis media. They may be associated with the common cold, flu, or respiratory infection, or occur in conjunction with strep throat. Any of these conditions can cause germs to invade the middle ear, where they become trapped when the Eustachian tube – a thin tube that connects the ears to the nostrils and is responsible for equalizing air pressure on both sides of the eardrum – swells, preventing proper drainage of fluids. Children’s Eustachian tubes are smaller and shorter, and considerably more prone to blockages. This is the reason why they experience the majority of ear infections.

Symptoms of otitis media include earaches, difficulty hearing, fever, irritability, loss of appetite, vomiting and diarrhea. Small children may cry or fuss more often than usual, tug on their ears, or have increased difficulty sleeping.

How Otitis Media is Treated

Otitis media may be either acute (of short duration) or chronic (persisting for unusually long periods or recurring frequently). Treatment depends on both the underlying cause of the infection, and how long it lasts. Antibiotics like penicillin or amoxicillin are commonly prescribed for ear infections resulting from bacterial infections such as strep throat. Pain medications can be given to relieve suffering, but be sure to avoid giving aspirin to children, as it has been linked to a potentially fatal disorder known as Reye’s syndrome. Most cases of otitis media are over quickly and can be treated with eardrops and pain relievers.

Chronic cases may require surgery. Ear tubes, which provide ventilation and allow fluids to drain from the middle ear, are a popular option for children who experience frequent ear infections. Tonsil and/or adenoid surgery often works when other methods have failed.