Ear infections are one of the most common childhood maladies, and are the biggest reason for pediatric visits in the first few years of life. It is estimated that 75% of children will have at least one ear infection by the time they turn three. This is largely due to the fact that their Eustachian tubes are still developing, making them susceptible to inflammation and infection. 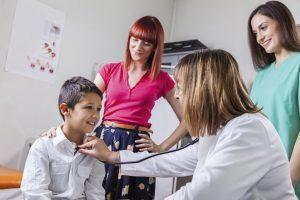 Ear infections are the result of fluid building up between the eardrum and the inner ear rather than draining, as usual. The fluid exerts pressure on the eardrum, leading to pain and discomfort. This occurs when the Eustachian tube is blocked, especially following a viral or bacterial infection.

Irritability is often the first sign of an ear infection. Your child may be much fussier than normal, and cry for no apparent reason. He or she may tug at the ear. In addition to pain, symptoms include discharge of fluid from the ear, fullness in the ear, trouble hearing and sleeping, fever, headache, dizziness, vomiting, diarrhea, and a loss of appetite.

Children most at risk are those who are under the age of two, attend daycare or preschool, and are exposed to tobacco smoke.

Young children might not be able to vocalize what is bothering them, so a trip to the doctor is your best bet at diagnosing an ear infection. Your child’s pediatrician will exam the ears using an instrument called an otoscope. If the inner ear is red or swollen and fluid or pus is visible behind the eardrum, then it’s likely that an ear infection is present.

In many cases, doctors will take a wait-and-see approach before starting treatment, since a majority of ear infections clear up on their own. Over-the-counter pain relievers can be given to manage discomfort, but avoid giving your child aspirin, which has been linked to a serious condition called Reye’s syndrome in children. Press a warm washcloth against the ear for a comforting compress. If symptoms persist, antibiotics or other medications may be given.