Rhinitis is a condition in which allergy-like symptoms occur, but without a known cause. Unlike hay fever, it is not the result of allergens, even though the symptoms are very similar. To differentiate the two, rhinitis is often referred to as non-allergic rhinitis. 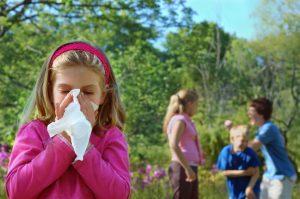 The symptoms associated with non-allergic rhinitis closely resemble those found in people who suffer from colds and allergies. They include a runny and/or stuffy nose, sneezing, and postnasal drip. An itchy nose, eyes, or throat – common with hay fever – are usually absent in non-allergic rhinitis.

The exact cause of non-allergic rhinitis is often unknown, but there are a number of triggers that can bring about symptoms. Some of them are temporary, while others can become chronic. These include viral and bacterial infections, environmental irritants like dust and smoke, chemical fumes, temperature or humidity swings, foods and beverages, medications, stress, and hormonal changes.

Certain factors can increase your chances of developing rhinitis. These include exposure to irritants such as smog and tobacco smoke; continuous use of decongestants; being female and/or over the age of 20; exposure to irritants in the workplace, like solvents or aircraft fuel; and preexisting health conditions.

Non-allergic rhinitis should be treated as soon as possible, as it can lead to health problems such as chronic sinusitis and nasal polyps if left unchecked. Your doctor will likely order allergy testing in order to rule out allergens as a cause, and may utilize diagnostic testing such as a CT scan or nasal endoscopy to confirm the diagnosis.

Treatments will depend upon the seriousness of your symptoms. Home remedies that involve irrigating the nasal passages, using a humidifier or vaporizer, and drinking plenty of fluids are all useful in keeping your airway passages moist; this is often enough when non-allergic rhinitis is mild. More severe cases may require medications such as antihistamines, decongestants, and nasal sprays. If nasal polyps or a deviated septum are the root of your discomfort, surgery may be necessary.